glassflower / Design News  / How the BBC World Cup film was made How the BBC World Cup film was made

Now that the Royal Wedding is out of the way, marketers’ attention can shift to the next big event: the World Cup. We’ve seen a few ads appear already but the first major piece of World Cup advertising launched tonight, when the BBC ran a promotion for its coverage of the event during the FA Cup final.

The trailer that BBC Creative has produced for the 2018 event features everything you might expect from a World Cup promo – the highs and lows of tournaments past – but with a key difference: everything is rendered in embroidery.

CR had an opportunity for a behind-the-scenes peek of the making of the film a few weeks ago so can vouch for the fact that, yes, everything is as it seems and the film really is created as a tapestry.

The idea to use the unusual technique sprang from the original brief given to BBC Creative, which, according to creatives Xander Hart and Edward Usher, was to emphasise the World Cup’s historical importance and the fact that it is “the cultural impact of World Cup moments, not just who wins it” that matters.

With this in mind, the team set about collating a set of the moments that have moved into cultural folklore. For the final film, this includes the skill of Diego Maradona, the flair of Zinedine Zidane and the emotion of Paul Gascoigne, moving through to a preview of the most exciting talents of this year’s finals including Cristiano Ronaldo, Lionel Messi and Harry Kane. 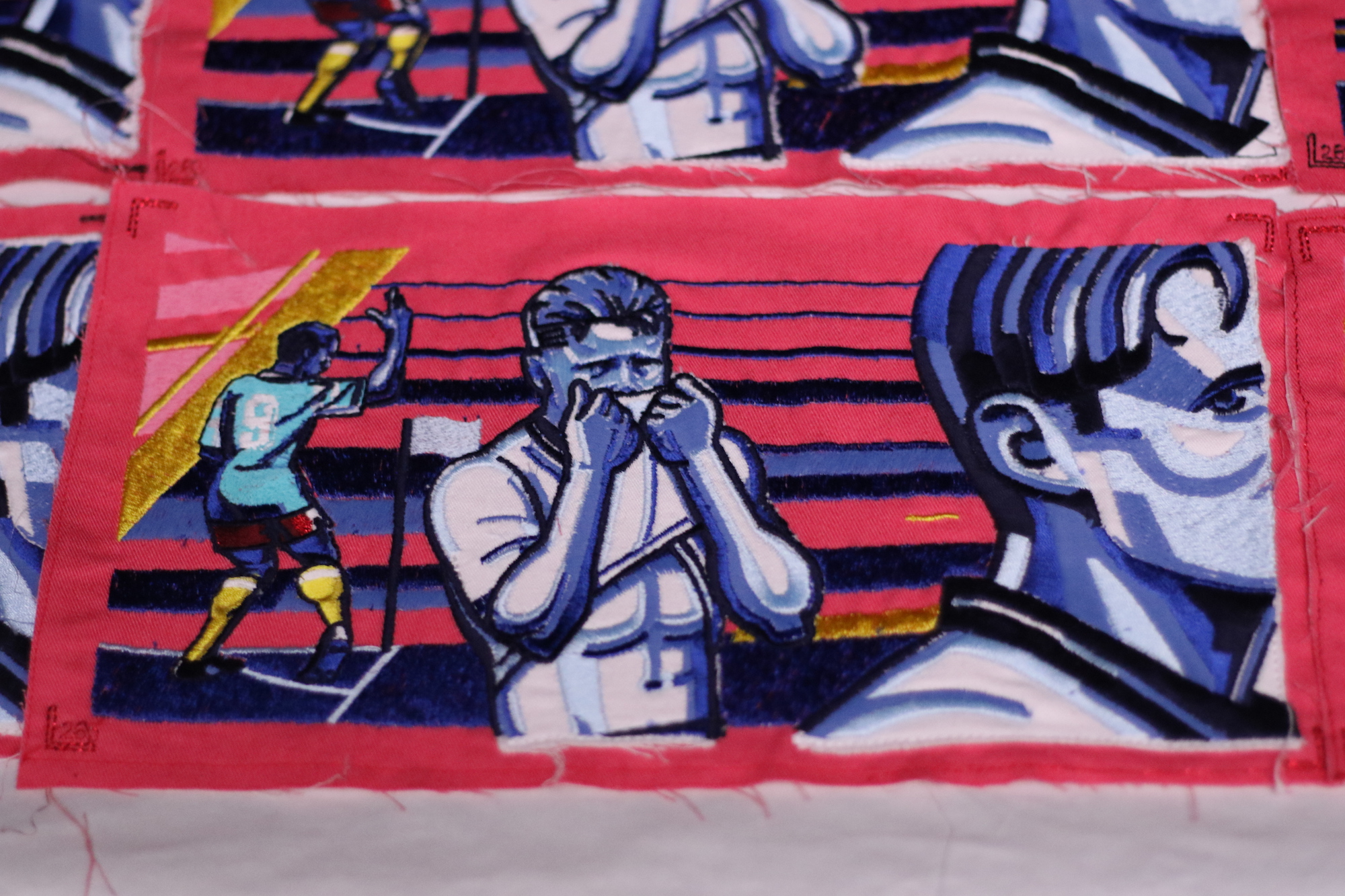 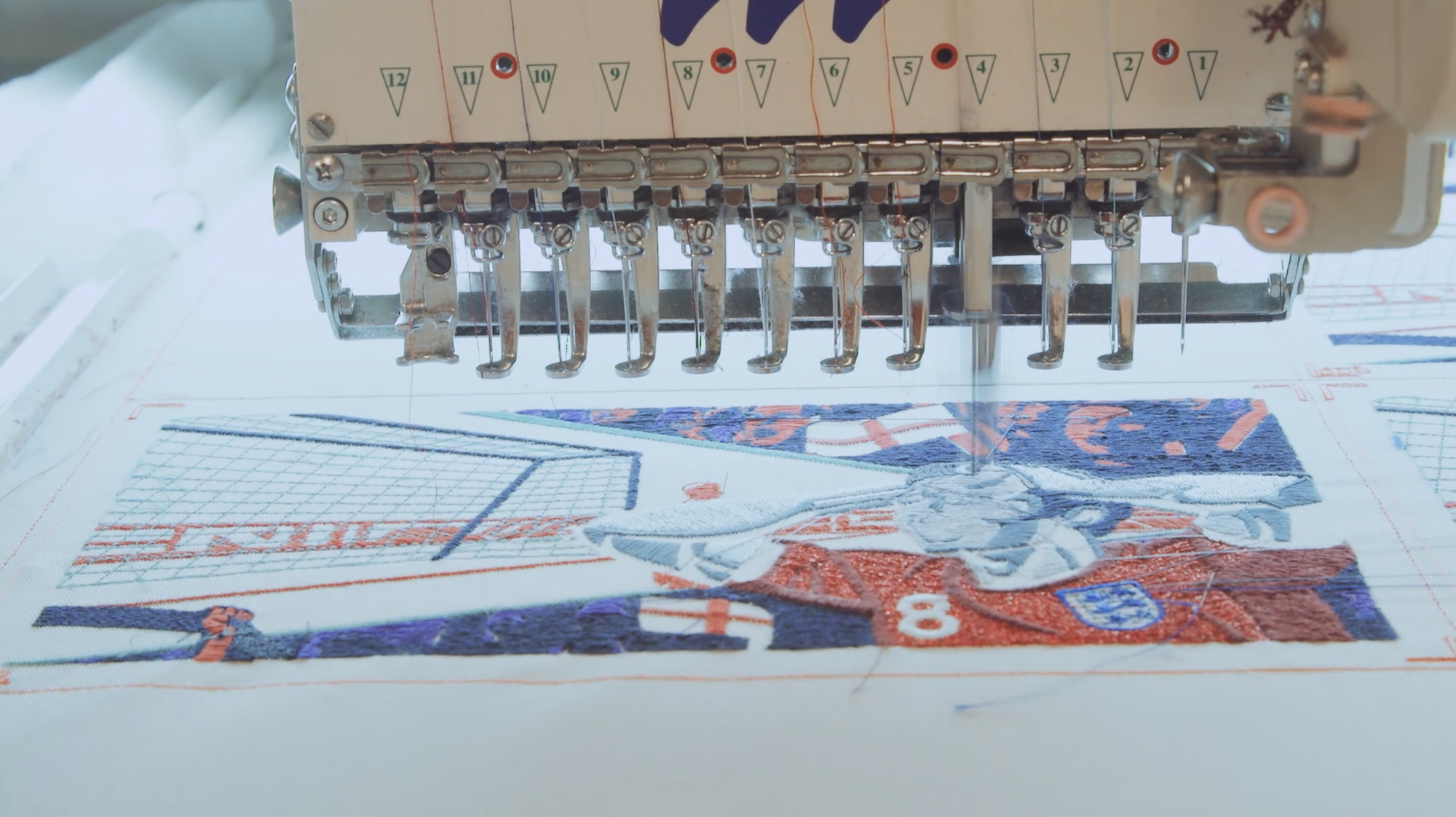 “We could have just chopped together loads of these moments, but we wanted to do something a bit more interesting than that,” continue Hart and Usher. The team came up with the line History Will Be Made, and then began looking for ways to articulate this historical element in the film. It was from here that they thought of using a tapestry effect, which also provides a link to Russia, where the World Cup is being held, but without drawing on too many design clichés associated with the country.

“It’s easy to fall into a lot of clichéd Russian styles,” says Tim Jones, creative director at BBC Creative. “It feels Russian, and it looks Russian and it sounds Russian but not in a typically Communist, Soviet mode…. As a Westerner you’re fed a certain view of Russia and it’s scratching the surface a bit more.”

“I think the best things take a level of craft and commitment and endeavor,” he continues. “We’re here to do the best possible thing we can make and not cut corners. The craft and the story behind it should be as good and as important as the creative itself.” 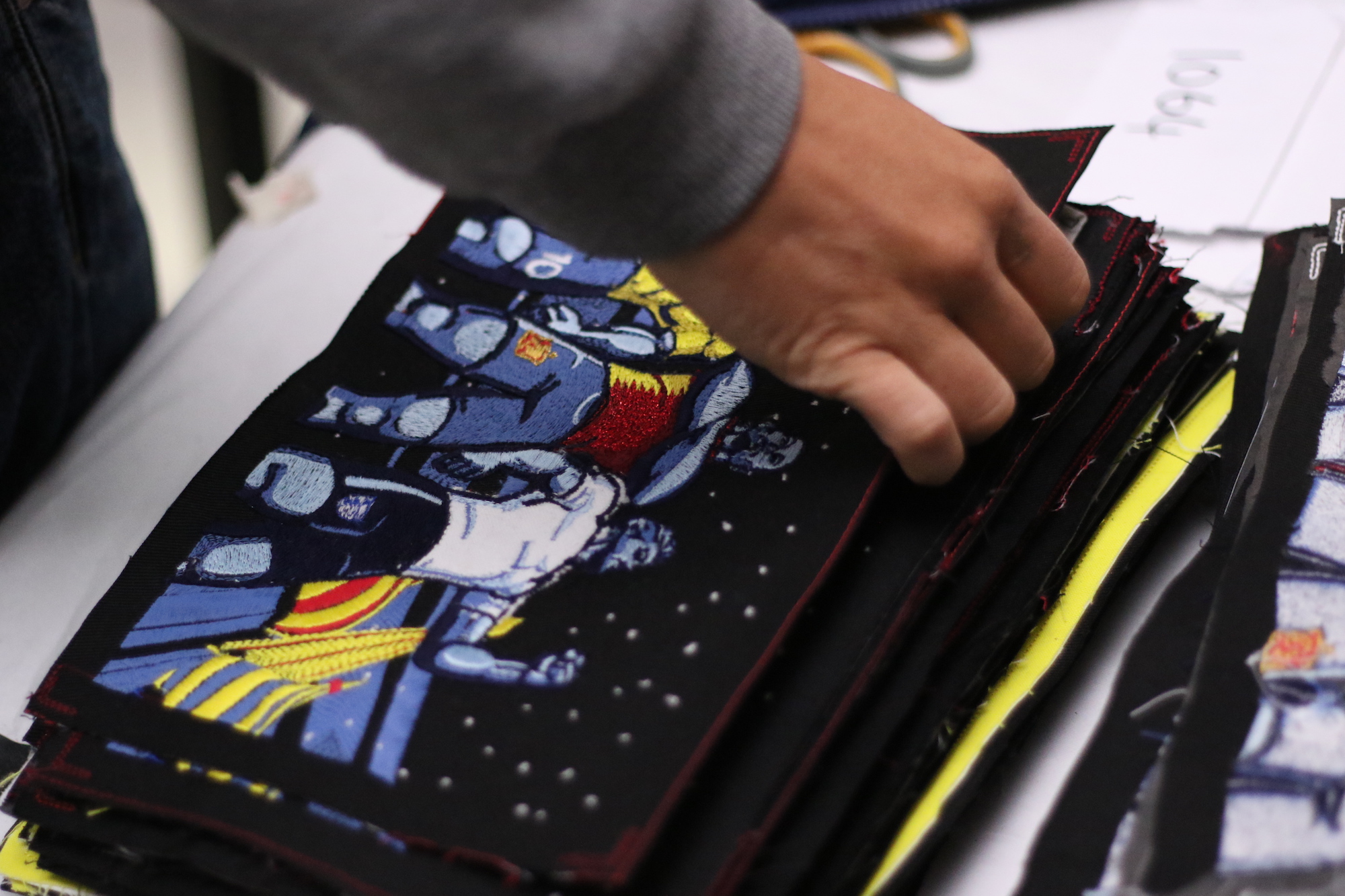 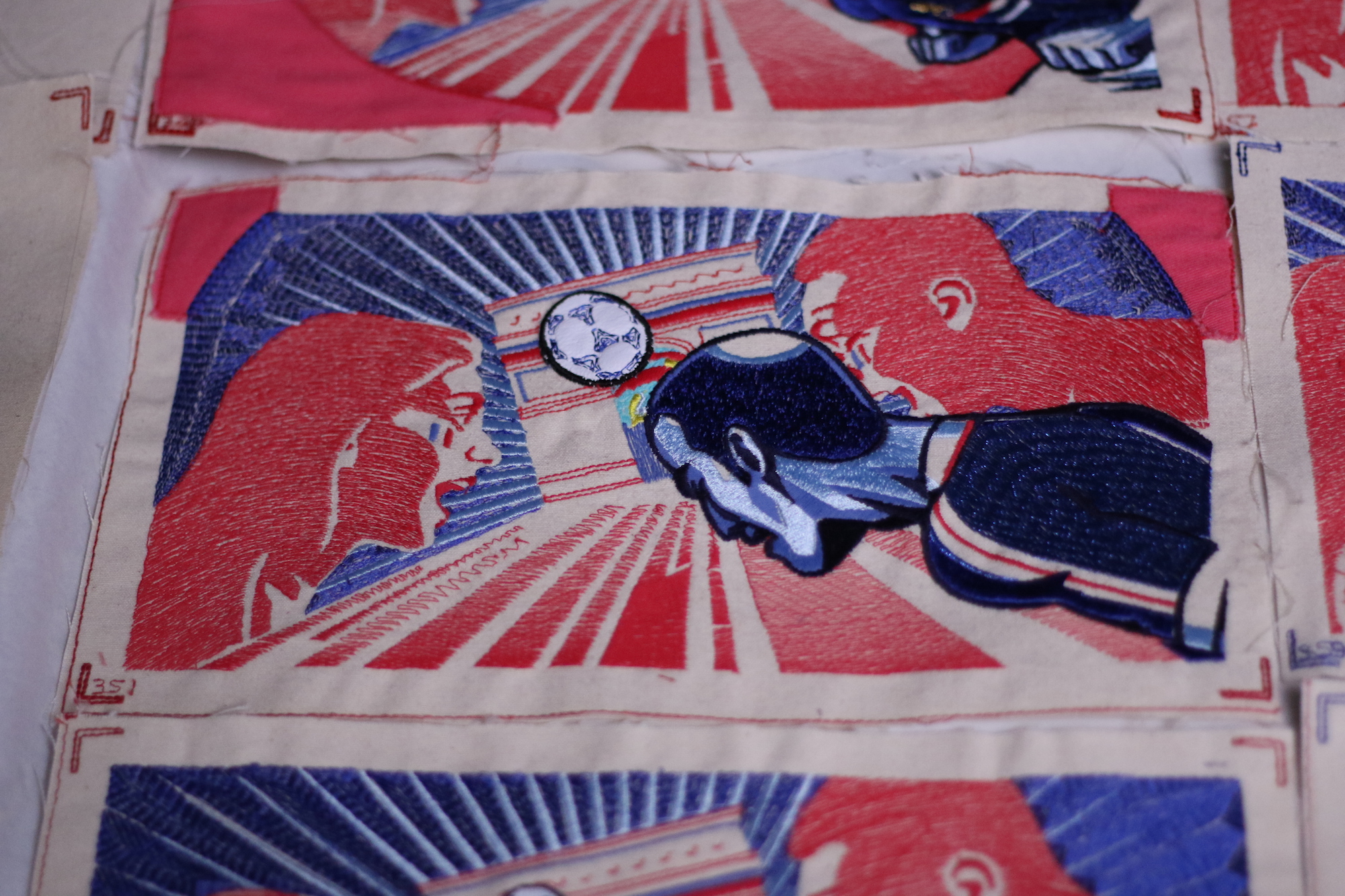 Finding a director to bring their embroidered film to life was surprisingly easy: Nicos Livesey had created a music video with a similar effect in his video for Tharsis Sleeps by Throne, so he was a natural choice. “It wasn’t like a normal job where you take the idea and then pitch out to lots of directors,” says Jones. “It was ‘there’s only this guy who does this, or who has done this, or done anything close to this’ so why would we go anywhere else?”

Livesey may have entered the job with experience of embroidered animation, but bringing the BBC World Cup story to life in thread still created challenges. “Time is a big part,” he says. “It just takes ages. Some frames can take 20 minutes, but some can take over two hours to stitch.

“The process also creates challenges in the design. You have to make sure you don’t go too overboard with detail and shadows, you must be really aware of not making recognisable things too small. Each of the frames we stitched out were roughly A5, that’s the smallest we could make them without losing too much detail. The bigger you make the frames, the more time it will take to stitch out. So you have to make a compromise, time or detail.” 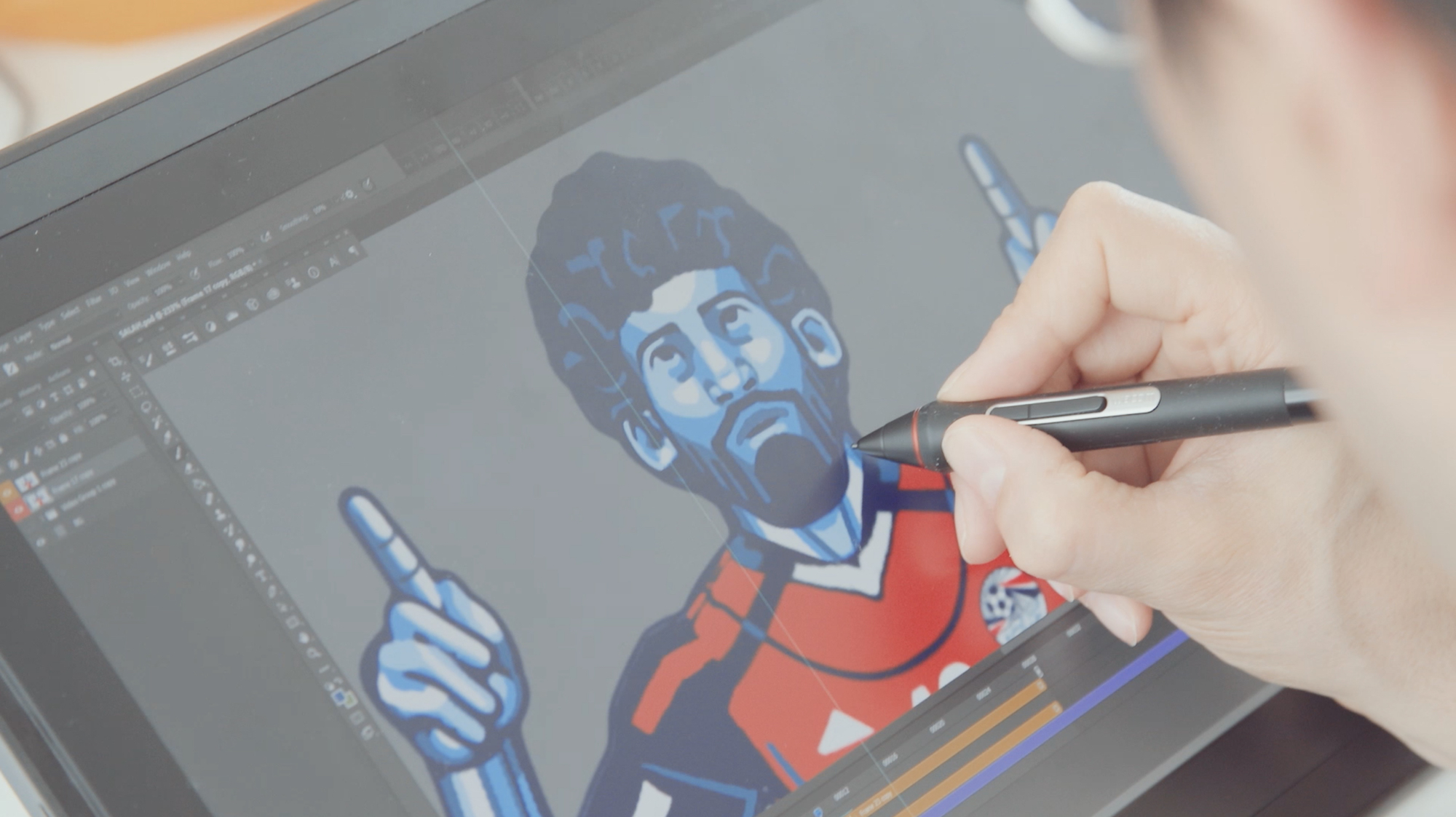 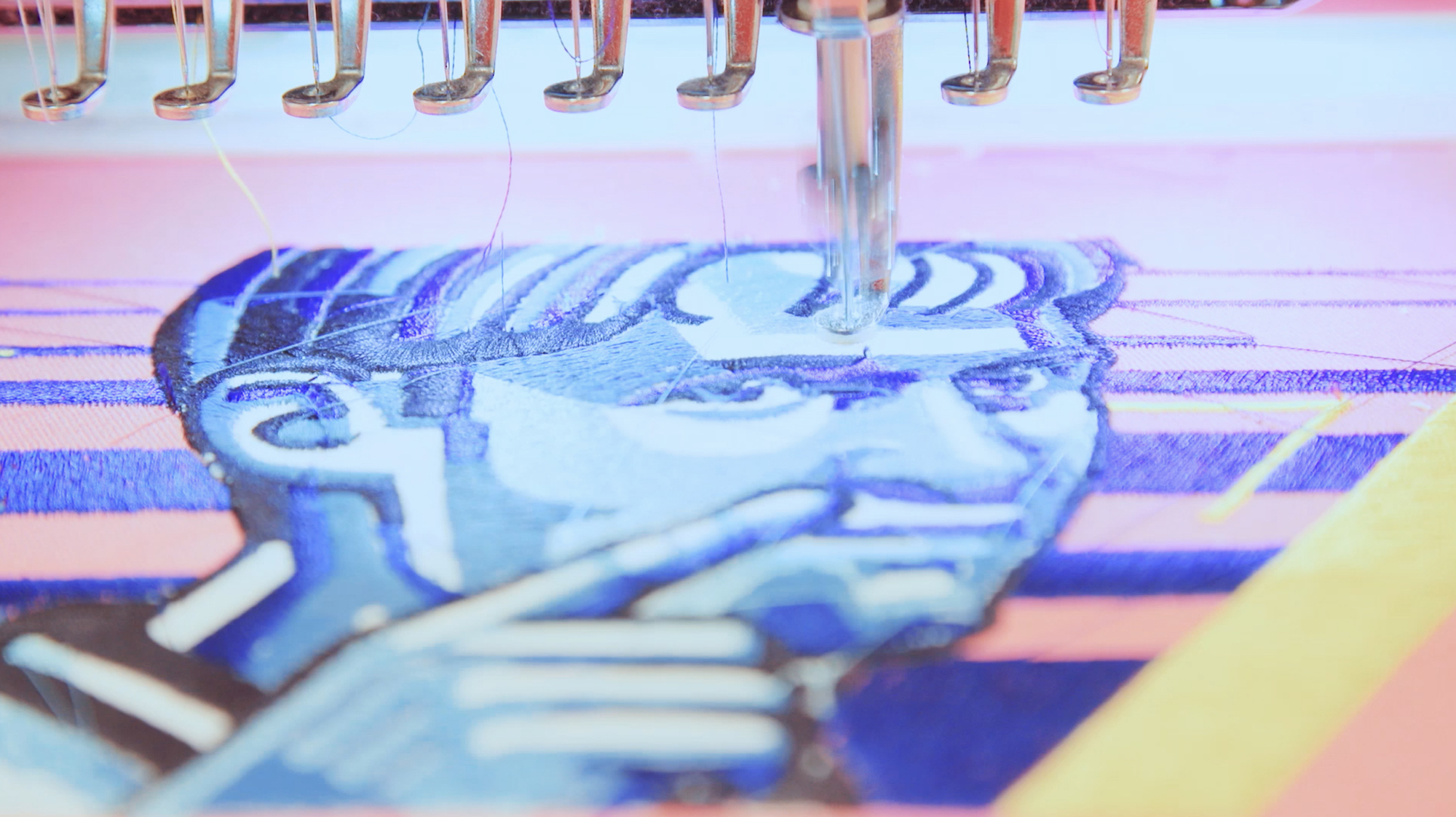 Working with a bigger budget did allow some opportunities that weren’t available to him with his music video, however. “We had the ability to work with a professional embroidery company,” says Livesey. “The last embroidered animation I created, I essentially taught myself and a little team how to use the machines. I then learnt how to digitise the 2D animation frames. This is the process where all the different stitches are selected and converts the image to a stitch format so the machines can read them.

“Working with The London Embroidery Studio brought a whole new level to the embroideries. With their keen eye, expertise and digitising skills, it gave me the chance to play with more colours, different thread textures, various materials, different stitch patterns, stitch direction, stitch densities and even play with colour gradients. This time we used a lot of appliqué, which allowed us to change the background material colour in smooth transitions, and we even used some 3D puff embroidery.”

The final crucial element to the film was the music, which is a new version of the traditional Russian folk song Ochi Cheryne. “Once we’d settled on the concept we spent a lot of time looking for the right track,” says Hart and Usher. “We actually ended up going back to one of the first tracks we found, which we felt was so perfect we didn’t really believe it would work. It’s a Russian folk melody … we rearranged it with an amazing composer called Alex Baranowski and it was recorded by Sir John Tomlinson. That was an amazing find because it works really powerfully.” 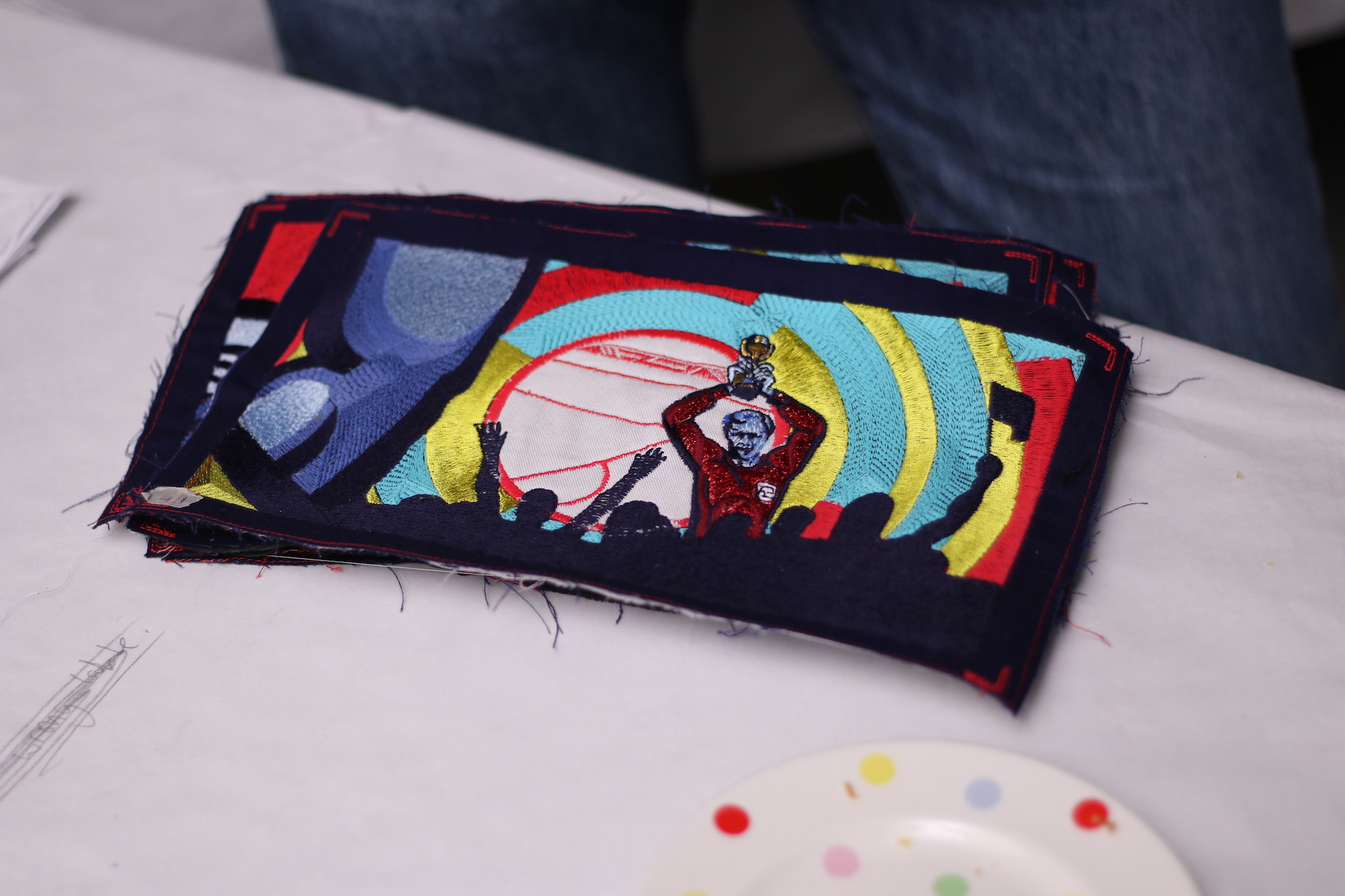 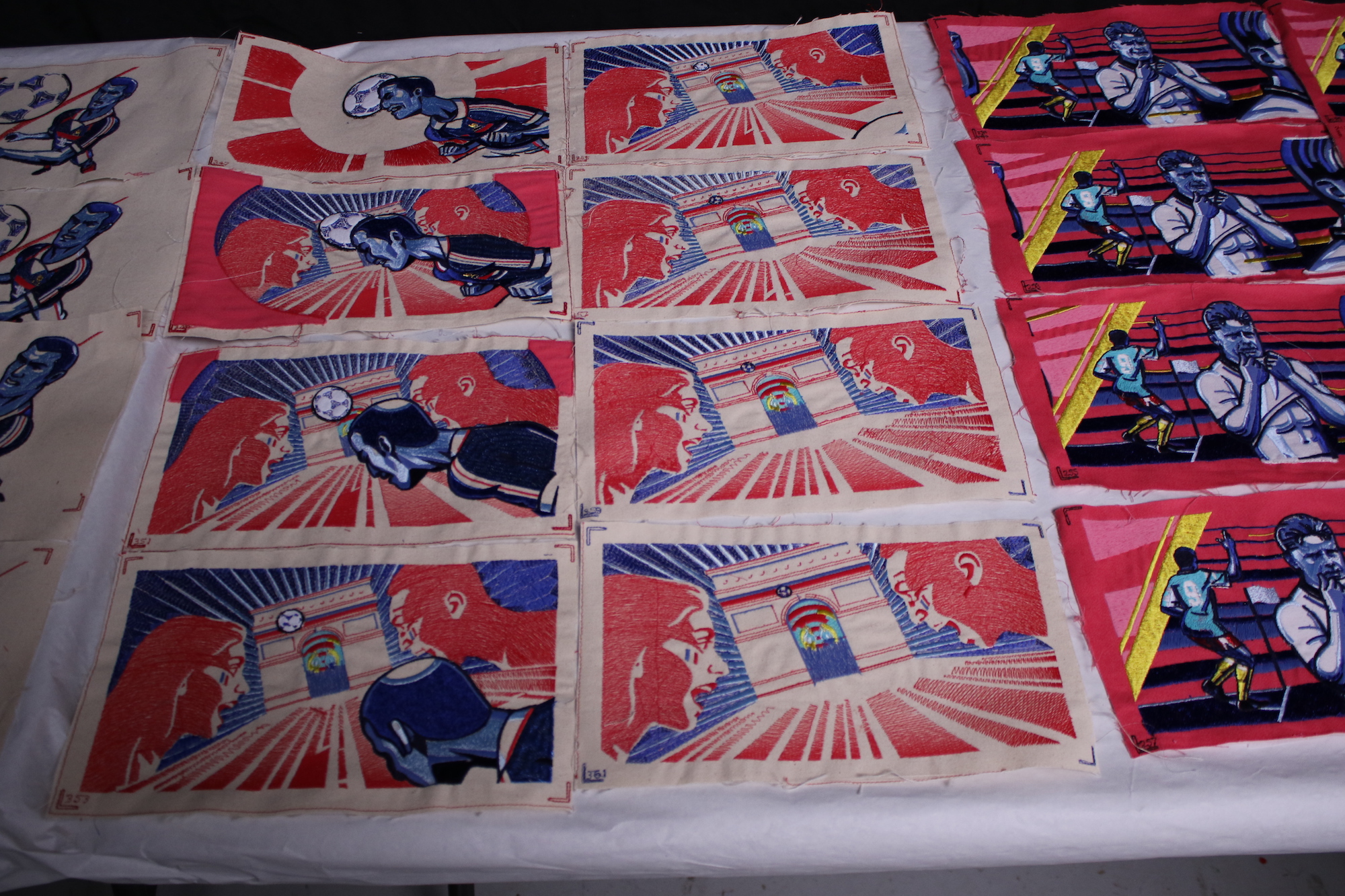 The resulting film sees some of football’s most memorable moments reenacted in a way that we’ve never seen before. More than 227,000 metres of thread were used to create over 600 unique frames of tapestry, that if laid end-to-end would measure over 1,200 metres in length. For those who might be itching to see it for real, the idea will also be realised in a seven metre-long tapestry that will be put on public display, with moments from this year’s competition added to the tapestry after the tournament’s completion, creating a historical record of the 2018 World Cup.

Perhaps a little surprisingly, the film doesn’t put too much emphasis on England and expectations for the home team’s performance at the tournament. “There’s some England moments in there but it’s not trying to labour on them too much,” says Jones. “A lot of brands and I imagine a lot of broadcasters will go quite heavy on the England message but I don’t think that’s really necessary – I think people love the World Cup more than they love England. It’s a bit cheesy but it’s representing the BBC audience – it will play out worldwide but also we have to represent the whole nation.”

The post How the BBC World Cup film was made appeared first on Creative Review.